Shadow of the Drill, by Rhani D’Chae: Born of Circumstance, Bred for Revenge, Kindle Edition 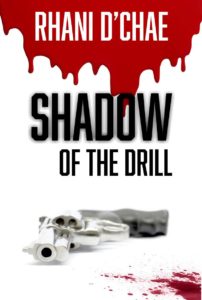 A Gritty and Violent Thriller.

A brutal experience transforms an unproven young tough into a ruthless killing machine.
For fifteen years he waited, building his body into an unstoppable weapon so that vengeance would be had through the strength of his will and the power of his hands.

On the bloodstained streets of a northwestern city, the enforcer known as the Drill stalks his prey. Judge, Jury, and Executioner; he seeks out those who target the weak, condemning them to the kind of justice that has made him a legend.

Buy Shadow of the Drill, on Amazon!

And Rhani D’Chae’s Amazon author page! Check out her more of her amazing novels!

Sensationally dark, massive hands gripping your throat, shocking to the point of—oh my, holy s**t! Let the blood flow, the fire burn, the drill turn. Max Payne meets the Punisher, meets a team who could knock the both of them out cold. Sheer will and resolve, the Drill sharpened and scarred over the course of fifteen years, a long overdue reckoning. But all of it made Decker the man he’d ultimately become. And along with his best friend, Rudy, they’ll tread resolutely, undaunted. They’ll never forget the crimes committed against them, against young Maria. Payback, sweet revenge, yet not without a few bullet wounds, close calls and unexpected hell on earth.
While reading the Kindle version of Shadow of the Drill, I found myself rubbing my hands together, brimming with schadenfreude. Gripping my chair’s armrests because, I hoped that this team—assisted by some beautiful and talented ladies, a pain-in-the-rear go-getter here and there, and some eager new recruits—could pull it off. What a rush! 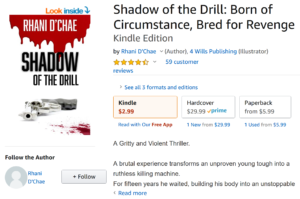 This story is written with a clever omniscient perspective that puts you smack into the mind of each diverse, lucky and sometimes very, very unlucky character, all the time. And unique, was the author’s way of building tension. I enjoyed it most times, although sometimes I just wanted the action to finally take place. The author really makes you wait for it at times. Whereas and many times, right when I thought this was it, finally, this is it, the drill is coming down, the story takes a dive into another mind, another situation, another escalating tribulation or dire circumstance.

But the author’s style, tension building and rapidly changing perspectives, diving into one character’s thoughts and then the other, made this story just that much deeper, and at many times, dreadfully unnerving. In the end every thought from just about every character made the finale that much more rewarding. The payback that much more satisfying. Shadow of the Drill explores the dark side of gruesome, necessary tasks: Decker’s job. Shocking, brutal vengeance, as he applies his professional touch. This is a tale of retribution—and absolution, if there could be such a thing after what had happened…fifteen years ago.
Every character was well-developed to the point of perfection. I liked Decker, Rudy, Charlene, and sometimes even, Tawnee. And the bad guys, whoa. Shadow of the Drill put me on the edge of my seat. I loved the fight scenes and mostly, the payback. And the sex scenes were unique to the point I actually didn’t speed-read on by. I’ll admit, erotica isn’t really my thing. Many times sexual and erotic parts, I’ve found, tend to be somewhat alike. Read one, or a hundred, you’ve read them all. But that’s not the case here!

Overall, I liked just about everything about this story, a story that really drilled itself into my head. And being in every character’s head made it as though, at times, Decker, The Drill himself, had gotten to me. Drill coming down, blood ready to spew. Difficult moments, entire lives lived in pain. Waiting for revenge. Deep, painful scars. Fists flying, bullets penetrating and pipes heading toward faces. And especially, some of that long-awaited, gratifying payback.

This story had it all. Buy Shadow of the Drill, on Amazon!