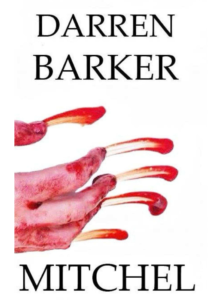 Whatever you want to say about revenge, that it is all about hurting someone who hurt you, that it is vengeance, the desire or even the compulsion to pay back someone for a wrong against you, it is generally agreed that it is much more satisfying when exacted some time after the initial injury.

Mitchel Gause has had an eventful life. He has seen a lot and suffered a lot over the years. His revenge began accidentally but his hate overcame his scruples when his lust for vengeance and for the kill exploded within him, yet to the rest of the world he was a very quiet unassuming man, kind and caring. He was known to be the sort of friend who would do anything for anyone…

Just don’t cross him, he will never, ever forget it.

Be sure to follow author Darren Barker on Twitter. He is very supportive of other authors and creatives! And, check out Darren’s author page on Amazon. He has many other dark works, including poetry!

Starts off with a peeved guy getting some revenge. Because it sort of happened by accident. Well, at first, and then the protagonist gets hooked. Like the HOOKS of Hellraiser HOOKED! But this recollection of events is BY FAR more sadistic. And Mitchel tells all, no holds barred.

I read the first 20% on my Kindle while drinking my nightly whiskey and one thing is for sure, I’m never going to read any of Darren’s books while drinking again. What a plummet through the wormhole to Hell! Twisted my brain. I don’t well remember every minute detail of the first 10% to 20%, when my whiskey kicked in and Darren’s dark insanity destabilized my sanity, but I do remember that it scarred my freaking mind—probably for life!

But I made sure to read the rest. Yeah, because I’m no quitter. So, I took a deep breath—the next day, of course—and said, “I can do this!”

But it wasn’t easy. Because of the way Darren tells his tale. It’s his unique style. The raw, straightforward lamppost-to-the-head way of his descriptive words. And maybe a soldering iron to the eyeball, here and there, a spread-eagle head-bash or a hot iron on the leg, or electric cables clamped onto the gonads or a cat-kabob knife-fight bathroom scene, or the—SMACK!

…and she dropped quickly—“just like a clown with baggy trousers and diarrhea, with nothing to hold it in.”

And then, happiness. Ah… The relaxed contentedness. Ordering in a pizza, reflecting upon his work. “Oh, happy days back then,” Mitchel said, “really happy days…”

You never know with this tale. A kill, then coffee and time alone with the wife. It’s raw, and that’s an understatement. It’s unpredictable. It’s jaw-dropping. Mitchel is the self-told account of a barber named Mitchel, who is married to “Her Indoors” (I learned Her Indoors is British slang for a “domineering wife”). Anyway, Her Indoors doesn’t give him what he needs, but—and as Mitchel soon enough discovers—his new pastime does.

Things get crazy. Then insane. See if you can make it through this tale without sweating and wincing, or even BARFING! But maybe it was just the alcohol, you say? Nope, I read at least 85% of this novel sober. But maybe it was the way author Darren Barker’s writing seems as though it’s a really REAL account of Mitchel’s downward spiral into sick, demented, torturous madness…
YEP!!!

So, what say ye, dark horror fans. Do you dare? Can you handle the sweat-inducing degree of darkness author Darren Barker is capable of dishing out? Sure, “Sure I can,” you say…

Because you’ve seen the movie Hostel. Piece of cake. The Texas Chainsaw Massacre. No problem. And you excitedly bought a movie ticket to see Saw, part I all the way through to part VIII… and Friday the 13th. You watched Jason don his hockey mask—while you stuffed your face with popcorn and drowned your gullet with a six-dollar Pepsi. One murderous rampage after another… you love the stuff… popcorn traveling toward your stomach… while you craved the fear. While YOU craved more, and more… You craved death…
So sure, you say… “I can handle Mitchel.”
Think again!

Because Darren Barker is the Macabre Master. He’s a maniacal MacGyver out and about, lurking in the dark, devising inventive ways to enjoy the kill. But only paper! It’s just a novel—or is it? Because, as Darren says at the very end, putting it on paper is the only thing stopping him from actually—
A drop of cold sweat falls onto the open page of your book…
You close it and look in the mirror…
Continue reading Mitchel, and find out. If you dare! 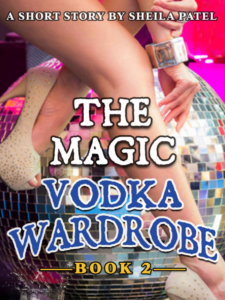 “Sheila are you coming into the temple with me?” Sue Ellen asked as she got out of the car. “Two prayers may be better than one.”

Mrs Singh would give anything for a wedding proposal for her daughters, then the mysterious text arrives, something about juicy mango’s? Will Shaz accept or just visit the Magic Vodka Wardrobe where she can drink and dance with her sister Trace and Aunt Sheila?

As Rogue One hits the cinema, George Lucas is back from Uni, but will he catch the eye of the knicker-less shop girl, Sheryl? Martha starts a new waxing business from her back kitchen while her little Avengers terrorise the street. We also meet Betina, the dog walker and the homeless Skinny Rita as they do whisky shots at the community centre with Dammit Janet the local Buddhist nun.

As Storm Doris wreaks havoc, Martha chases the wheelie bin full of empty tins of cider down the street. The wardrobe shakes and Shaz and Trace dance to Stormzy as the hairy barman Bachittar watches from behind the counter…. Sighing.

Follow author Sheila Patel on Twitter! She is very supportive of authors! Also, be sure to check out Sheila’s Amazon author page. 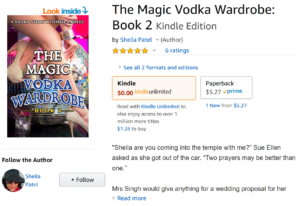 I’m in lurve… Let’s dance—AGAIN! All night long with Sheila and Shaz, Bachittar and Gypo Bob… and plenty of new characters, too: Skinny Rita, Slut Candy, Omar the Saudi and Dammit Janet, AND Mad waxin’ Martha. But it doesn’t stop at just dancin’! Take a ride in the caravan (I learned this is an RV), and go round and round the roundabout. But be careful and don’t spaz out too much—or shake your booty all the way from Oz—because the bouncers might think you’re a tripped-out terrorist attack in action and taser your twitching arse to the dance floor! Can you handle it? This blunt blast of crazy comedy with plenty of cool tunes sprinkled in will have some recoiled and red-faced, but most’ll be wasted, soon enough, ripping off their “I was Bored so I joined Tinder” T-shirt and joining in on the madness with their own favorite drink!

For me it was TEQUILA!

What a Thanksgiving day it was. I timed it perfectly, making Sheila Patel’s book the only other thing—besides cooking and a game of Hedbanz with the kiddos—that I would devote my attention to before family arrived. It didn’t take long too read and you know what, I liked entering The Magic Vodka Wardrobe this time, even better than when it shot the shit out of my cherry the first time I entered it (—you gotta read my review of book one!—). This second volume, just like book one, had me laughing out loud—and my kids yelling “WHAT IS IT, DAD?”
Up-to-date quips about current events—La La Land accidentally winning Best Picture, “I think I’m going to learn brick laying and move to America,” and a goblin-like wizard, audit dude who’ll make sure The Wardrobe is up to code. British comedy hits all-new highs. YES! But I must admit, it’s kinda new to me. Maybe that’s why I like this snarky and sarcastic, no-holds-barred ZANY INSANITY so much! Five stars once more for a read that rehabilitates my brain from the humdrum quotidian fiasco we call life. I’VE FOUND MY FIX. And I’m looking forward to book three. I already marked it on my calendar. Timed and ready! Locked and loaded! Glass raised!