Within The Glass Darkly: Volume 1 of the Glass Darkly Gothic Vampire Series, Kindle Edition,
by William Gareth Evan—WHAT AN ADVENTURE!

Nineteenth century Paris. A spate of gruesome murders has everyone gripped with fear as the killer continues to terrorise the city. There are rumours that a murderous ‘beast’ is stalking the streets of Paris at night…. 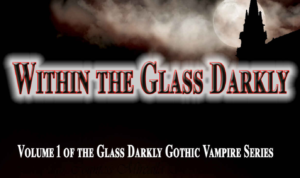 A mysterious nobleman and his sister enter the lives of the Perrodon family and their friends. The unwary Parisians are about to encounter the terrifying reality of a darker world that will tear their young lives apart.

One man already knows the identity and true nature of the ‘beast’. He is also aware of an ancient vendetta against members of the Perrodon family. Only his knowledge and experience stands between them and their mutual nemesis.

Not your typical vampire novel. WOW! And to have written something so marvelously dark and adventurous, as well astonishingly clever, I must conclude that the author himself, must be a vampire. That he had lived for hundreds of years and amassed the knowledge and experience of someone with such copious amounts of time.

It’s difficult to review this novel without spoiling things, so I won’t ruin it by hinting too deeply at the innumerable plot hooks that kept me intrigued. But I must say, William has a wonderful way of slipping in clues and leaving breadcrumbs, or should I say, bloodcrumbs. His techniques keep the reader fully absorbed, and later in the novel, mesmerized. Characters surprise in terribly wonderful ways, popping into the story at times which couldn’t have been more cleverly planned. Like the ancient, powerful, cruel ones, and others like humorous Zel, who finally gets to be happy in life—except, for not being able to stuff his voracious piehole henceforth. But being a naughty queer boy to his hearts desire, well, that makes up for it.

William’s tale pits good against evil, in every splendor, in original ways: nascent vamps to the seasoned, almighty, top-dog ones, and wise men who’ve been at it for a good while, going at it with all a human mortal can. And nonbelievers to believers, and those who become a ripped-apart, bloodbath of a meal. Then, with evil boiling over, a plan is made and the diverse team, ready or not, must go in. Let the battles begin! The culmination of events erupts into fiery, bloody mayhem. An axe to split the head vertically: “No, Gunter, that won’t take care of it—the head must come off clean!” And does it ever. Light shines in and undead noggins roll, holy water sprays and the flames toast ’em all! But this is not your traditional battle, and all that, only goes so far.

Far enough? Read and find out. What comes next transcends worlds. The Glass Darkly and beyond. Creatures who’ve been tortured by their own personal hell—the longer the stronger, and more. There will be no easy defeat or traditional fighting to win this one, and no swift absolutions. William does a fantastic job of describing so many things: eye-scratching rats, books flying off shelves and breaking noses, and time spinning forward, out of control until there remains nothing but a bl

ack void. And dream worlds beyond this one, more than mere humans can fathom, and existence in the dimension beyond the “Glass Darkly.”

Five stars for diverse, otherworldly and wise characters, seductively scrumptious and divine shapeliness, for things not being what they seem and clever manipulation of my mind! Sexy ladies and steamy madness. And one whole star, thanks to Zel. He’s so dang crazy-cool and weird, pink wig and stockings and all. And too, one for the beautiful ladies and their powers, and Will’s masterful descriptions that made them strut their stuff in my mind. Hands down, this is a winner. Story exceptionally, originally, and creatively told, a few fangs to the neck, coffin closed and sealed, pins and needles set up perfectly for a sequel. I AM looking forward to the next in THIS series!

But don’t take my word for it. Read it for yourself! Kindle edition and paperback available on Amazon. Within The Glass Darkly: Volume 1 of the Glass Darkly Gothic Vampire Series